You’re not getting it wrong 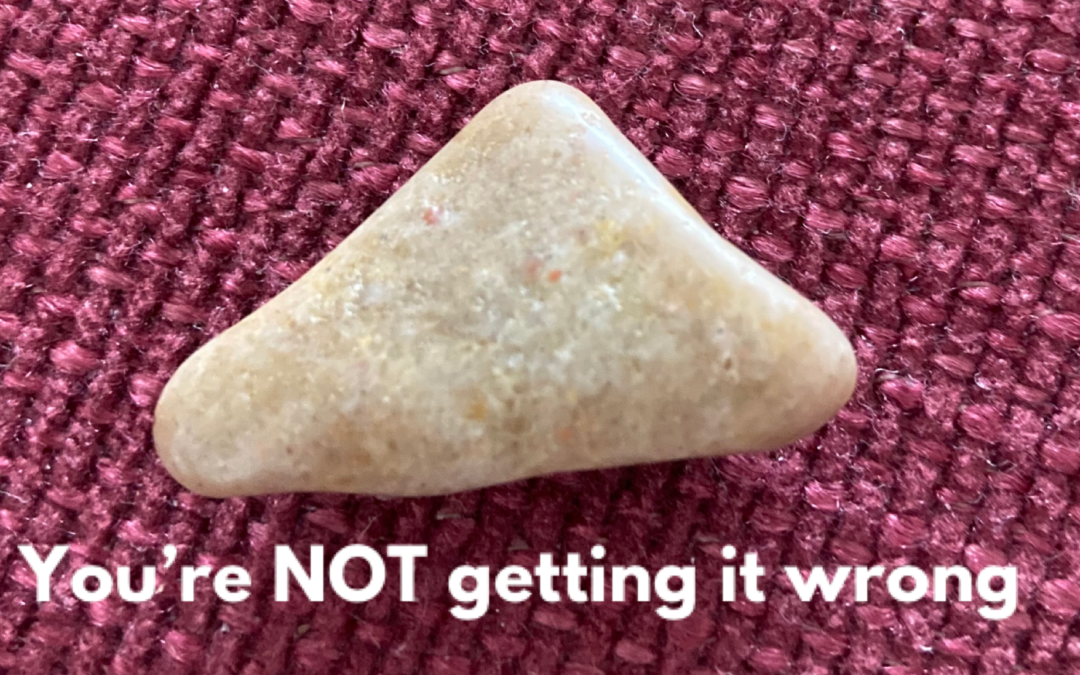 “You’re not eating the right foods

You’re not exercising the right way

There aren’t enough positive thoughts in your day

You’re not reading the right books

You’re not listening to the right teachers

You’re not taking the right supplements or enough of them

Or on the other hand…

You’re not choosing to take medication, as honestly, you don’t need to be a martyr to pain…”

These are just some of the insidious words that can swirl around our heads when we’re on a healing journey, particularly a healing path with a chronic condition.

Next year, I will have spent a quarter of a century in the well-being community. We’re passionate about our craft, our skills, our knowledge. We’ve seen the wisdom we impart work beautifully with clients. We work from the heart, and we work as a force for good. All of this an absolute truth.

What happens, though, when we and our clients are surrounded by the vastness of wisdom and knowledge? With so many choices and avenues to head down?

Is it possible that there’s the potentially creeping message of not getting it quite right? If you’re not seeing improvements in health or wellbeing, you’re not doing enough? Or you haven’t found the right healing path? And that most insidious phrase of the inner critic…you’re not enough?

We are, of course, constantly evolving and learning, and sometimes the path that will be of most benefit, is still waiting for us. We need to be careful though, as that skulking message of not being enough, can worm it’s way into our pyche.

With my practitioner hat on, I direct my energies to the healing potential of womb work, the power of menstrual cycle awareness, and how to move through menopause in a conscious and reflective way. Yes, I’ve been evangelical about the modalities, staying true and authentic to the way I have seen the work change lives, my own life included.

Without hyperbole, the work has readied me for the challenges that I may or may not face over the course of the rest of my life.

Better days, but not getting better

I am a practitioner, but also someone with a chronic and incurable condition.

I have a cyst in my spinal cord, part of my Central Nervous System. The cyst is known as a syrinx, and those with a syrinx have a condition called Syringomyelia. In my case, it’s congenital so the syrinx formed while I was in the womb.

Strange terminology, and a condition that is considered to be rare (although I’m not convinced it is that rare, but that’s for another time!)

It’s interesting having a condition that is not only unrelatable, but hard to pronounce! Due to it’s “otherness”, the condition, by it’s nature doesn’t create a culture of general understanding. It’s a little too alien for that.

Although, to be fair, information available about it is very limited and, at present, not enough research in the UK has been put into it.

The added bonus of Syringomyelia is that many find that it’s not a stand-alone condition; it’s usually present  amongst other syndromes and medical challenges for us.

I’ve been told I also have Fibromyalgia and have had Irritable Bowel Syndrome for as long as I can remember. Whether you’re in the well-being community or not, Fibromyalgia and IBS are more familiar terms; more relatable. More information and resources are at hand to share, and therefore to offer the possibility of help and support.

On the scale of how much these syndromes affect our lives, IBS can be anywhere between an annoyance and debilitating; a Fibromylagia flare up on the other hand is most definitely debilitating.

If you add Syringomyelia back into the mix though, what you have is a condition where there’s the possibility of the Central Nervous System being interrupted, that the body’s reactions and responses may not be as expected.

This makes so much sense to me after the many years of trying numerous modalities, and being confused why I seemed to respond in the opposite way. I always wondered why acupuncture exacerbated symptoms!

The moment of epiphany for me, was listening to a talk recently given by Anthony Williams, known as the Medical Medium. Much of his work is directed at those with chronic conditions, such as Epstein Barr, Chronic Fatigue Syndrome, Fibromyalgia and digestive issues.

He was talking about those of us walking around, trying to cope with chronic conditions, and not knowing WHY we have them. He has his theories, his belief systems and methods of improving health. He has a huge following, however his protocols don’t resonate with me personally.

My epiphanic moment though, was realising that I DO know the WHY for these chronic conditions I’m living with. My Central Nervous System has an interruption in it. I have a syrinx, a cyst in my spinal cord. Not a cyst ON my spine, but IN my spinal cord.

In it’s simplest form, the Central Nervous System is the part of us that tells our body what and what not to do. It’s the communication hub for everything we do, from breathing (communicating with our autonomic nervous system) to urinating, to moving.

It’s therefore a crucial part of the human body to not be firing at full capacity!

For those of us who have been supporting ourselves for years, spending probably thousands of pounds, trying to find foods, exercise/movement, spiritual guidance, and modalities to support us, somewhere along the line, the message has popped into my head – “I’m getting it wrong”.

This has called for me to take an about-turn in perspective, and in the process, ease of my own mental health.

How might it feel to be at peace with NOT trying to get BETTER, but instead focussing on ways to have BETTER DAYS? Suddenly meeting Syringomyelia becomes less of mountain to climb.

In our “fix-it” culture, though I’m not sure how well that sits.

My question is, who’s with me?

Who’s on their own journey with a chronic condition and simply wants to enjoy better days?

Or just as potently, who, as a practitioner can support those with a chronic condition to enjoy better days, rather than looking to fix the condition?

Not giving up, but not fighting

However, bear in mind that straining when doing a poo, or picking up an object that’s too heavy are ways that a Syrinx can worsen. It’s not necessarily hard to create situations for deterioration and progression.

Perhaps it really is as simple as relinquishing to knowing that I will NOT get better, but I WILL feel better on some days.

Some folks use the term “warrior” when it comes to fighting chronic conditions.

For myself the “warrior” term, and “fighting” is counter intuitive. If I’m chronically fatigued, why would fighting be a congruent and effective way of approaching these conditions?

What if “being” with the condition, listening to what it’s asking of me, conversing with it, playing around with what might help, my nervous system can be calmed rather than over-burdened.

This approach really is born out of the menstrual cycle and menopause awareness work: listening to my needs. Not necessarily conforming to societal and linear expectations for health conditions to have a beginning and an end. There’s so much more in between.

The possibility that following the path of least resistance, can lead to a more soothed soul.

I do though, also understand the need for others to step into warrior mode, it places us in a stance of action, not taking what we’re being faced with lying down, it’s something to overcome. I get it, I really do. It’s just not my chosen direction for this situation.

If I was looking at a condition that was curable, had an end point, yes I subscribe to standing as a warrior. In fact, it was how I approached having ankle surgery last year. With one foot in surrendering to the length of time the recovery would take, and the other in warrior mode; working diligently and valiantly, seeing the ankle healed and holding me with certainty and strength. Little did I know that my Central Nervous System was choosing a different path for me.

The reason I feel compelled to write this piece is as a support to those of us living with chronic conditions; that we’re not getting it wrong, whatever healing path calls us.

Not getting it wrong to be looking to create better days. It’s not fatalistic, it’s calming and a relief to stop the quest for health perfection.

And lets face it, trying to perfect anything in these Covid times, with all the outside pressures of living during a pandemic; it’s just a pressure too far!

If you’ve sat with me as I’ve held space for you in a treatment, led a meditation for you, held space in circle, heard your words; you know that I always invite you to meet where you are, that all is as it’s meant to be in that moment.

The message always is – you are not getting it wrong and that you are enough.

I’m not getting it wrong; I am enough.

It’s been so insightful hearing other’s experiences who have been kind enough to read the piece. The words of a wise yoga teacher have stayed with me. She shared the yogic perspective of the Warrior; that of strength, courage and resilience, rather than of fighting.

It made me take a breath, and acknowledge how all of the warrior aspects have kept me moving, learning and even supporting others in the work I share.

At the beginning of the year, I set an intention of TRUST for 2020, you know, a word of the year kind of thing. Nearly every day I’ve spoken a mantra of ” I welcome TRUST (yes upper case TRUST!) into all aspects of my life”.  Dear goddess, has it held me while symptoms have worsened, other challenges have come my way, and in the outside world, living through a pandemic!

Is it possible to be a Warrior of TRUST!