Restoring the Soul – The Power Held Within a Mexican Shawl 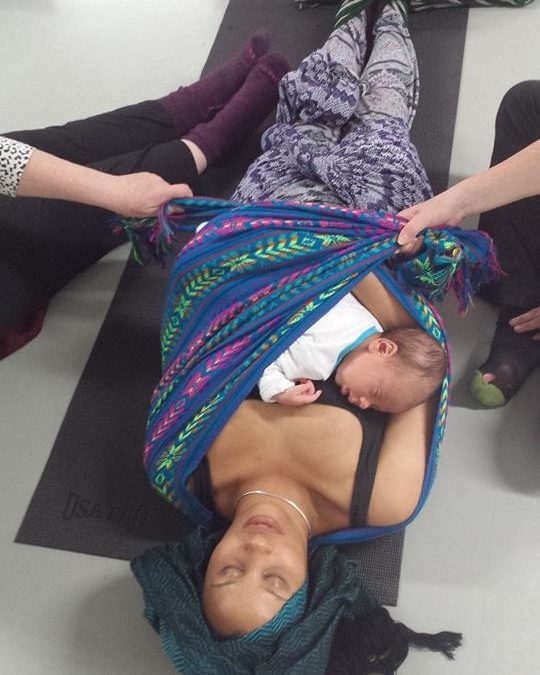 “A rebozo is a long flat garment used by women mostly in Mexico” This is part of a description that comes from Wikipedia. It is a sentence holding such simplicity.

I thank Wikipedia for this, as I am always in awe of the rebozo’s simplicity when I use them in treatments. In reality they are beautiful, intricately woven shawls, steeped in mystery yet imbued with Mexican history; a garment which allows for release and effortless give, but is also a vessel for a deep sense of containment and security.
It’s history? “There is evidence that the rebozo was worn in Mexico in the early years of the Spanish colony, but its mysterious origin is unknown as well as how it became part of Mexican identity.” – Frida Kahlo: Beyond the Magenta Rebozo by Simon Grimberg

Despite its mysterious conception, it is filled with Mexican tradition; the weave, the order in which the rebozo is created, the pattern, even the honour of being the empuntadora who makes and attaches the fringe at the end.
It is a garment which is integrated in to so many areas of life, “Women wear it casually or formally as an accessory, and use it in practical ways: to cover their heads when entering church, as a shield from the sun, to keep warm, to carry a bundle, to hold a suckling infant, or in any number of creative ways.” – Frida Kahlo: Beyond the Magenta Rebozo by Simon Grimberg

Image: From Made in Mexico: Rebozo in Art, Culture and Fashion

Conversely, the rebozo was used as a scented death shroud, “Aroma se luto…has a particular herbal and floral infusion that is prepared over a length of time in the dry season. The infusion consists of dried tarragon, sage, cloves, rosemary, Spanish moss, apple mint, star anise, cinnamon, rose petals and calla lillies. Traditionally, this very special rebozo was used to wrap the deceased for their journey to the after life.” – El Viaje/ The Journey – Birth to Death (Information from the Made in Mexico: Rebozo in Art, Culture and Fashion Exhibition held at The Fashion & Textile Museum 2014)
It was revolutionary artist Frida Kahlo who made the rebozo most visible to the world, rarely being pictured not wearing one.

Image: From Made in Mexico: The Rebozo in Art, Culture and Fashion, Toni Frissell 1937

Having chosen to work with these exquisite vessels of love in my massage practice, I asked a client how she felt after experiencing an abdominal massage, followed by being wrapped in the rebozos. Her response was:
“I have always felt supported and empowered…as well as humbled, it makes you feel ok in your own body…it makes you feel you own your body, it makes you feel you have no body, you just are, you’re pure love, all that’s necessary, nothing else needed”

Oh, the beautiful power held within the Mexican shawl.
Fertility Massage Therapy Teacher and expert, Clare Spink runs Rebozo Workshops for birth workers and body workers. I was lucky enough to help out at one she held recently. Being witness and part of what unfolded, will be a day in my professional life I will never forget.

We were in a room of women and one beautiful-hearted Dad, who spent the day there with his 6 week old son, so that Mum could learn how to use the Rebozo and breastfeed when necessary.
For the birth workers they were eager to learn the techniques to help ease mamas in labour, help encourage a baby who is not lying in the optimum position for birth to turn, and give a different kind of support to their birthing women. For the body workers they were there to learn techniques that would leave their clients with a sense of weightless freedom; loosening stiff arms, legs and necks, so that they could now be swung, shimmied and unconsciously released. It’s hard to keep up resistance once the rebozo flow.

The learning had been fun in the workshop and there was a buzz in the room, then something extraordinary happened.
The atmosphere shifted from practice to sacred ceremony.

We were going to experience part of the Closing the Bones ceremony, which has Latin American and Asian origins. Traditionally it is a postnatal ceremony for bringing a woman back together after the physical, emotional, energetic and spiritual displacement of childbirth. But, for anyone who has been involved in a shattering experience; a break up, a loss, or even simply at the end of a massage when you want to feel your whole body come back together and reconnect, being wrapped in the rebozo is beautifully containing.
Back in the workshop, the women divided in to small groups. Time and respect was given to each woman, as the others slowly and consciously performed the wrapping and unwrapping. It was highly emotional for some, releasing for others, but the majority felt a deep peace in the experience.

Most beautiful was Closing the Bones with Mum and her baby who had just reached 6 weeks. I was moved to tears as baby peacefully fed, had a little cough, an extra cuddle from Mum and then snoozed peacefully on her breast. We wrapped them, with care, all gazing lovingly at baby Solomon, held safely in his mother’s arms. Once the wrapping was complete, we stepped away so that the two of them could just be together; be contained and held by the rebozos. Mum and baby lay together peacefully connected.

We invited Dad to step in and help with the unwrapping, which he did with such nurture and respect. After he unwrapped her head, and she opened her eyes, he placed a tender kiss on the forehead of his wife as she realised that her man had been part of what had just passed.

It was mesmeric, so moving, and it consolidated how this simple but intricate garment coupled with the act of ceremony, could have such a profound effect on the recipient.
When I ask a client at the end of her treatment, “are you OK for me to unwrap you?” The answer is always a sleepy “Nooo”!

If you would like to experience the exquisite rebozo as part of a massage treatment have a look here.
You can find more information on the rebozo here

Blessings
***Special thanks to the ladies who kindly allowed the photographs of the Rebozo workshop to included.